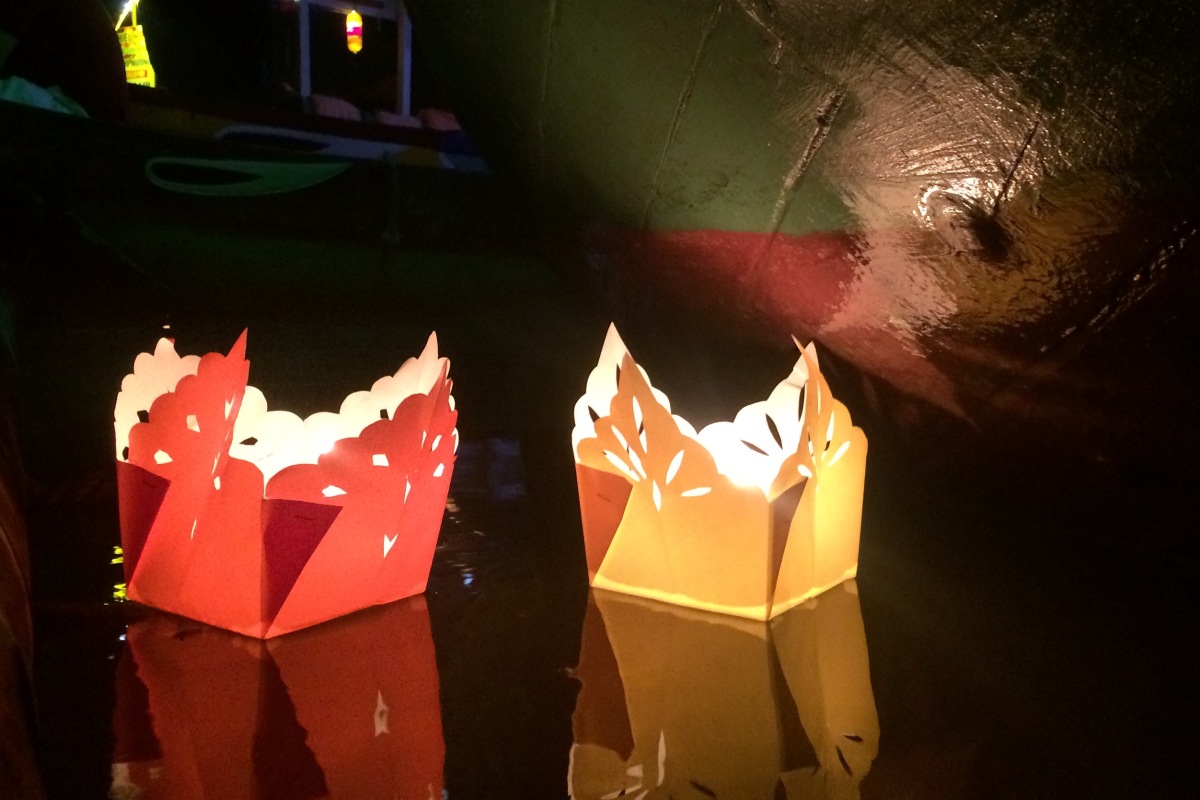 My initial impression of Hoi An was of admiration, despite it having an excess of tourists crowding the streets. This I don’t mind so much after being isolated in the monsoons of North Vietnam, with barely anyone else to talk to for a few days. Seeing other friendly travellers is actually quite a relief. However, this admiration soon turned to concern as I manoeuvred through the picturesque, UNESCO-recognised town, becoming acutely aware of a tragic downfall that looms over Hoi An as it is known today.

My intrigue for Hoi An came to fruition upon arrival when I was told by a local that once a month, the ancient town switch off the harsh bright lights of shops and streets and replace them with colourful lanterns, allowing the glow of the moon to shimmer off the river that runs through the centre. It just so happens that my visit falls on the same day. So I set off in the evening to explore.

As I walk I notice the moon’s struggle to break through the blanketing clouds as I walk out of a narrow and darkened alleyway. My eyes, desperately searching for light to pave my way as I turn onto another street, are instantly drawn to the hundreds of colourful lanterns suspended from wires above my head. Each one a different hand-painted design and each row an alternating colour.

The streets are now warm with a gentle glow and a charming flow of people strolling up and down. Along the street I see traders of Vietnamese food, Weasel coffee, clothes, local art, and Fairtrade crafts on every doorstep – attempting to coax myself and other tourists into their shops. I turn into another dimly lit alleyway and begin to hear the faint sound of traditional acoustic music echoing from the other end. A captivating sound, and one that begs for an audience. So I follow with a brisk walk.

As I emerge once again from the shadows of the backstreets, I see the clouds beginning to dissipate and the glimmering river comes into view ahead of me. It is swollen, seemingly at one with its artificial riverbanks, churned up and murky from the endless monsoon rain and yet surprisingly calm. Small wooden canoes and touring vessels sit idly along the ridge, with each gentle sway of a passing boat spilling water onto the sidewalk. I hear the music once more, this time it comes from a boat directly in front of me. A vocalist and two guitarists intricately pluck their notes for on-board couples to swoon over as they sit at their candle-lit tables. Like these romantics, I too feel compelled to dwell in the beauty of Hoi An. So I stand for a while, basking in an ambient concoction of colour and sound. To think how tranquil it must be to live here for a while, to take a stroll by the river in the morning and enjoy the quaintness of this little ancient town. My mind wanders a little longer until I am interrupted by a sharp tug on the sleeve of my right arm.

I look down and notice a small woman staring back in anticipation. Confusion is my first feeling, at the sudden violation of my personal space as I come back to the reality of what is no longer a charming flow of people, but instead a flock of tourists. I retrieve my arm with a polite refusal and turn back to the music, but as do so she grasps my arm once more – this time forcing a promotional flyer into my hand.

“Happy hour. Very cheap just for you”, she says in an excessively loud voice. “Happy hour, you want?”.

Happy hour. Since when do masseuses offer happy hour on massages? And I’m pretty sure I don’t own any unique qualities that would justify singling out just myself for this – clearly a sales technique. Agitation is my second feeling, at the physical restraint cast upon me and the obvious lack of understanding my initial refusal. I refuse once more. This time I begin to walk away to avoid tarnishing the chilled mood any longer. However, as I attempt to navigate through a thickening crowd, I am stopped and grabbed repeatedly by locals selling Christmas cards, more promotional flyers, various ‘Happy Hour’ discounts, and a cacophony of voices quickly escalating around me.

“Very cheap for you”

It seemed then that my mood had suddenly spread amongst the surrounding tourists. I looked around for an escape but instead noticed the general ignorant attitude towards these local traders. Rude responses, abrupt interjections, mocking sarcasm and belittling laughs from privileged holiday dwellers seemed more obvious. Then it dawned on me that after weeks of futile refusals, I too had somewhat adopted this ignorance in an effort to avoid the incessant pestering. My thought was that by not replying at all, I wouldn’t be seen as a willing customer. Feeling a little ashamed and guilty, my mind wanders once more as to why this rudeness seems so common amongst ordinary tourists and backpackers. I know already that it is partially due to a vocalised – and physicalised – hassling from locals. But what causes that? Tourism as a whole?

Tourism is evidently useful in bringing jobs and wealth to the area, which is why many locals grab the opportunity to capitalise from relatively wealthy tourists, putting themselves and their business – quite literally – in the path of their consumers. For local traders, it seems that to be persistent and proactive, or rather persistently intrusive, is to make money. Here, tourists have a tendency to become agitated by both the relentless hassling (even after saying “no” three times), and the arbitrary price-tags imposed on tourists (based on their assumption of perceived wealth). And so the reply is often a negative and somewhat sarcastic or ignorant one. The retaliation of the trader can sometimes be, deservedly, argumentative and insulting. Although it appears more so than not that any retaliation is suppressed due to the fact that she or he relies on this business.

I walk on with a fresh and compassionate attitude towards the local traders. Suddenly I am greeted with possibly the most beautiful attraction of the evening: thousands of candle-lit floating lanterns gently sailing down the river. A local tells me that the lanterns are said to bring good fortune – an admirable tradition. However as I watch the river a little longer I notice that no locals are partaking, instead they sell them to tourists who proceed to fill the river. What just seemed so beautiful to me had just become defined by the death of a local tradition and the subsequent commodification of traditional culture. Not to mention the masses of plastic, card and wax that continues to pile up in the river as hundreds of lanterns are sold for a small fee every day, and thousands sold on the night of a full moon. Where does it all go? 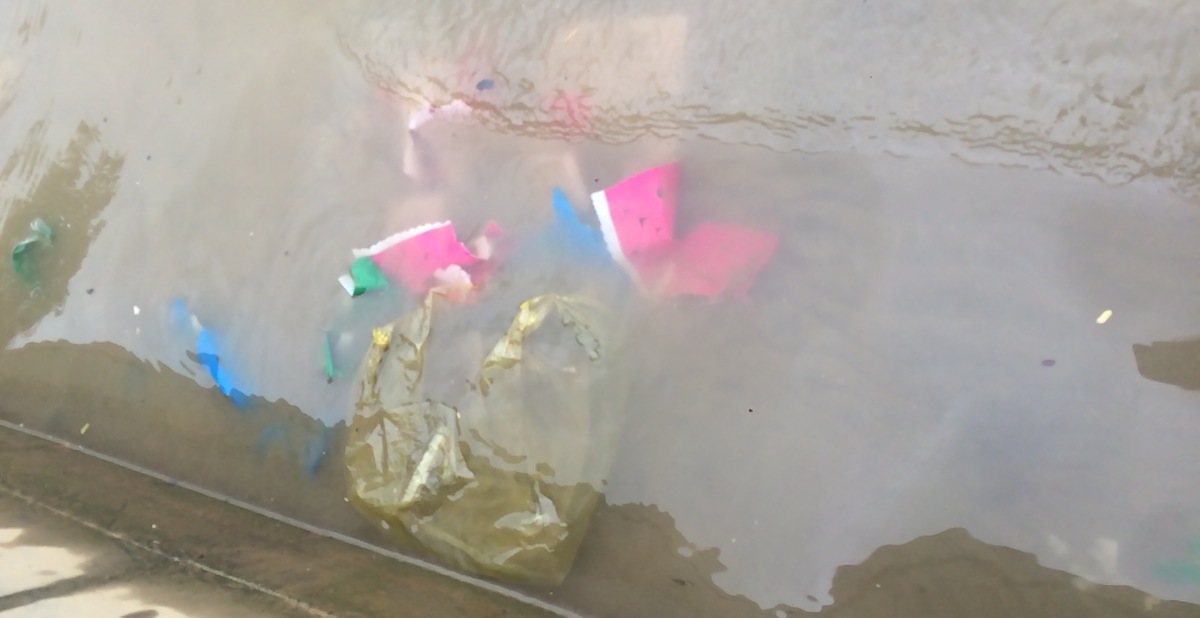 So Hoi An’s downfall may be imminent. With the substantial increase of tourism documented by city’s Office of Trade of Tourism, specifically around the monthly lantern festival, we can only assume these effects will continue to suffocate the beauty of the ancient town as a whole. The long-term effect of catering for a rapid increase in tourism has a disastrous impact on the environment, the local economy, and human sociality of such areas. Escalating consumerism requires the expansion of commercial urban spaces to accommodate trade, and a rise of waste and pollution follows – which is particularly obvious with the precarious water level and increasing amount of lanterns in the river. As a result, the living price within and around the ancient city increases and locals are forced to move elsewhere. However the opportunity for locals to capitalise on the incoming tourism draws them back to the centre for work. Market competition is therefore concentrated also. These deteriorating aspects are topped off with the vicious social spiralling between tourist-trader interactions.

It is a depressing thought only made more so by the juxtaposition of such a beautiful location. But alas, maybe something can be done. Maybe traders will stop wrapping bananas in plastic wrap and serving every single item of food in a separate plastic bag. Maybe consumers will become slightly more conscious of the economic position of local traders, and traders will realise and respect the right to refuse. environmental and social impacts of developing cities. I guess only time will tell.